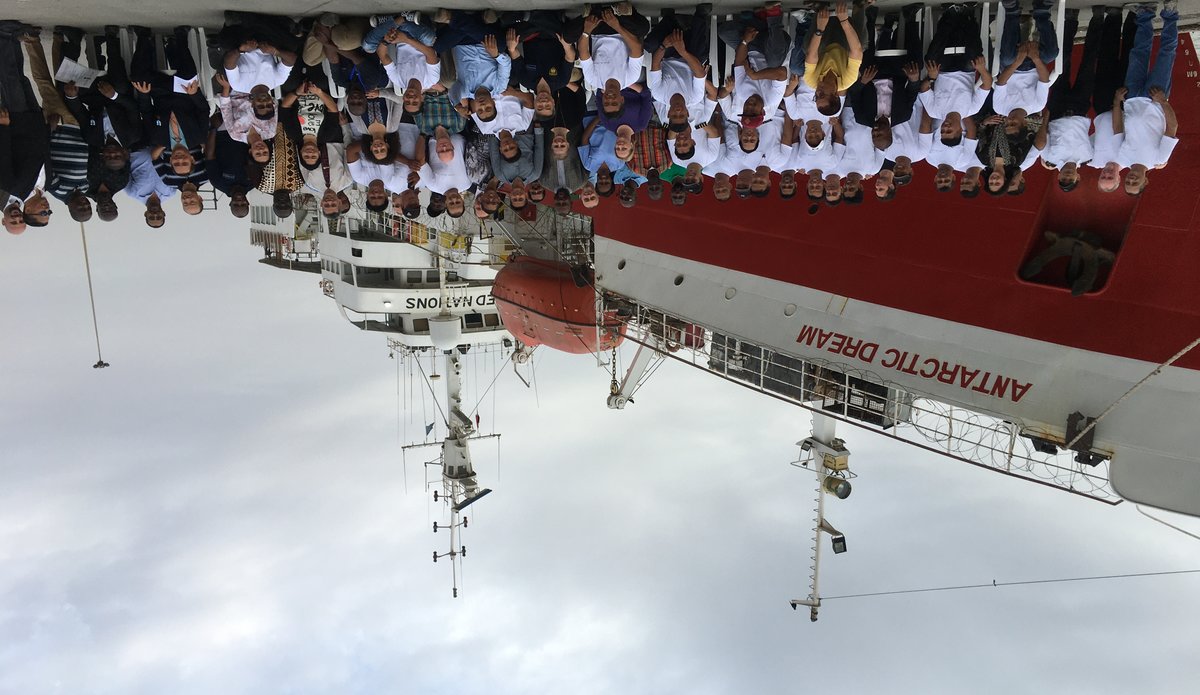 A group photo of the Mission personnel soon after it was established, in front of the original living quarters - the Antarctic Dream. UN Photo/UNMHA.

Following the *Stockholm Agreement, reached in Sweden on 13 December 2018, between the Government of Yemen and the Houthis under the auspices of the Special Envoy of the Secretary-General for Yemen, the Security Council in its resolution 2451 authorized the Secretary-General to deploy an advance team to support the immediate implementation of the Hudaydah governorate-wide ceasefire and a mutual redeployment of forces from the city of Hudaydah and the ports of Hudaydah, Salif and Ras Isa (Hudaydah Agreement). The Security Council also mandated the United Nations to chair the Redeployment Coordination Committee (RCC) established to oversee the ceasefire and the redeployment of forces.

An advance team of UN personnel arrived in Hudaydah city on 22 December 2018 and commenced the provision of UN support for the implementation of the Hudaydah Agreement. On 16 January 2019, the Security Council unanimously adopted resolution 2452 authorizing the establishment of a new Special Political Mission, the United Nations Mission to support the Hudaydah Agreement (UNMHA). The Mission brings together a variety of personnel, including military, police and civilian staff, from around the world to deliver on its mandate, with a focus on providing support to the functioning of the RCC and related mechanisms as part of monitoring the ceasefire.

Since its establishment, UNMHA has maintained dialogue between the Yemeni parties and continues to explore different ways to keep momentum towards the full implementation of the Hudaydah Agreement and related Security Council resolutions. Through sustained engagement, the Mission has supported the parties to finalize agreements on the technical details of a phased redeployment of forces and demilitarization of the ports of Hudaydah, Salif and Ras Isa, which provide a critical commercial and humanitarian artery sustaining the lives of millions in Yemen.

In October 2019, the Mission created with the parties a joint operations centre composed of liaison officers drawn from both parties and UNMHA, and supported the establishment of five joint observation posts located on the frontline in Hudaydah city focused on  real time de-escalation in areas of high tension.

UNMHA has engaged closely with United Nations agencies, funds, programmes and projects operating within Hudaydah, such as the United Nations Development Programme, the United Nations Verification and Inspection Mechanism and the World Food Programme, along with international and national non-governmental organizations operating locally. Through coordination and engagement with the parties, the Mission contributes to the enabling environment for the delivery of urgently needed humanitarian assistance and support to local communities in the Hudaydah governorate and the wider population of Yemen.

In the conduct of its tasks, the Mission works in close collaboration with the Office of the Special Envoy of the Secretary-General for Yemen and the United Nations Resident Coordinator.

*The Stockholm Agreement is comprised of agreements on the city and governorate of Hudaydah and the ports of Hudaydah, Salif and Ras Isa; an executive mechanism on activating the prisoner exchange agreement; and a statement of understanding on Taiz.